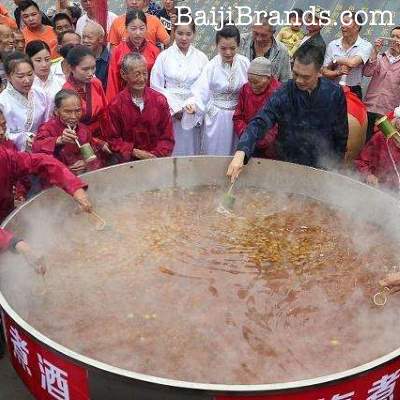 Baijiu is a curious drink. It’s simultaneously the most popular alcoholic beverage in the world, while also one of the most obscure. Schrodinger’s spirit, if you will.

Let’s address our claims that baijiu is the most popular hooch in the world. How can this be, when asking for a serving in most Western bars will be greeted by a quizzical look? Well, it’s an absolute phenomenon in China, taking pride of place as the hugely populated country’s national drink. This means that baijiu does not need the attention of the rest of the world to retain its place at the top of the table. The sums of money exchanged for bottles of this booze would make any publican’s eyes water.

This is just as well, as any novice drinkers find themselves at the mercy of baijiu’s potency. Those that have sampled baijiu speak of it in hushed tones, often using the colloquial nickname of firewater. Make no mistake, baijiu is not for those with a weak disposition – it’s almost pure alcohol, and one shot is enough to drop many people to their knees.

It’s advisable that the western world prepares themselves to apply some steel to their stomachs, however Baijiu is expanding in popularity in a big way, and sooner rather than later it will make its way onto countless dinner party tables.

Baijiu literally translates as, ”white alcohol” when decoded from the original Chinese. So far so simple, but that’s where the monotony ends. Asking for a shot of baijiu in China is akin to asking for rum elsewhere. You’re going to need to dig deep and be more specific, lest a native bartender will laugh at your naivety. There are countless brands of baijiu available to rich and poor alike, each of which comes with their own distinct aroma and flavour.

Alcohol has always played a pivotal role in Chinese culture. Point to any great creator of art or political figurehead in the nation, and a fondness for baijiu will not be far behind. To this day, baijiu is the ultimate social lubricant and equaliser. Sharing a shot of baijiu greases the wheels of business dealings, breaks down borders and class divides, and acts as the glue that bonds lifelong friendships.

The story of alcohol in China dates back to the Jiahu civilization. That’s 7000 BC, for the uninitiated. When archeologists began unearthing artifacts from this era, it was suggested that Chia was the first nation in the world to create alcohol. Rice, grapes, honey and hawthorn fruit were believed to be the core ingredients of this primitive wine, which later evolved into baijiu. To this day, rice remains an absolutely pivotal component in the creation of the drink.

The legendary Chinese philosopher Confucius was one the earliest cheerleaders of alcohol. In his celebrated tome Book of Rites, Confucius claimed that Chinese wine was supped at every essential event attended by the nation’s great and good, uniting church and state alike. It is believed that wine was used to toast the spirits of the dead, and esteemed generals would serve the beverage to their soldiers to boost their fortitude and valour on the battlefield. A monarch of Shang, King Zhou, is even believed to have swum in a lake of wine, dug by his loyal subjects.

China had a somewhat unique relationship with alcohol in these earliest days. It was seen as a rich man’s toy, and the sole preserve of royalty and their preferred citizens. A soldier may have been permitted a shot of wine, but that was always on the say-so of a superior officer.

Across Europe, the consumption of alcohol became more and more commonplace thanks to dirty and unsafe water supplies. China experienced no such problem, however. The people of this nation simply boiled their water to create China tea, and taxes were soon implemented against the production of alcohol. The more wine that was created throughout the nation, the richer the Chinese government became. This money was poured back into the production of wine, ensuring that the drink became more prominent and increasingly delectable.

The next evolution in Chinese alcohol took place during the Han Dynasty, dating back to 206 BC. During this era, jiuqu was discovered – or to use the terminology preferred in the modern age, qu. Qu takes the shape of a number of grains that are lumped and mashed together, then left in cool, dark location. The qu is then left alone for some time, while yeast and friendly bacteria grow.

Once the qu has matured appropriately, it is mixed with common Chinese grains. In doing so, the starch found in these grains is turned to sugar. This sugar, meanwhile, turns to alcohol. Once this was discovered, Chinese nationals started to partake in what they called ‘Yellow Alcohol.’ Once again, the hoi polloi of Chinese society had a beverage to call their own.

To learn how baijiu became the drink that the Chinese know and love, we must leap forward a handful of centuries. Nobody can say with certainty when distillation was introduced to China. Some say the technique was imported from other Asian territories during the S0ng Dynasty (starting in 960 AD), while others claim that it was a conquest of the Mongolian Yuan Dynasty (commencing in 1271 AD) that immediately followed.

The when is not strictly important. What matters is that once distillation reached China, baijiu was born.

With the arrival of baijiu, which was far cheaper than traditional Chinese wine, the common man and woman could enjoy alcohol in China. Farmers and labourers would sip on baijiu, while the nation’s aristocracy continued to sip wine. The key difference was that baijiu used substantially more grain during the production process. This meant it was considered to be a less refined experience, but it certainly packed more of a punch. That was more than enough to please the target audience of the drink.

As Baijiu spread around the country, each province of China reinterpreted the production process in their own way. To this day, baijiu is classified according to the location of its production. Recipes and techniques have been written in stone, and handed down from one generation to the next.

The next grand evolution of baijiu came in the 20th Century. In 1915, with China making numerous attempts to modernise their industry and trade practices, baijiu was introduced to the western world at San Francisco’s Panama-Pacific International Exposition.

This trip proved to be a double-edged sword. Whilst baijiu opened the eyes of many judges (and, presumably, made them water) and scooped a number of awards, the Chinese delegation returned home concerned that their baijiu production techniques remained archaic. For the first half of the Century, China placed a great deal of emphasis on industrialisation and continued to compete in a number of international contests.

This progression took another leap in 1949, when the Chinese Communist Party came to power following the Civil War. The new government combined a number of smaller breweries and distilleries to create substantial baijiu producing superpowers, and the quality and consistency of the drink was vastly improved.

Zhou Enlai, the first Premier of the newly founded People’s Republic of China, was a particular fan. With his support, which ensured that baijiu was served to all guests and dignitaries that visited the nation, baijiu overtook wine as China’s national drink. Time and politics moved on, but baijiu remained hugely popular. The drink was rationed under the leadership of Chairman Mao Zedong, but remained available to any interested party. Mao’s successor, Chairman Deng Xiapong, spearheaded further industrial evolutions in the realm of Chinese business.

The baijiu business continued to boom, and it was estimated that by the early 1990s, when the industry’s popularity peaked, there were up to 36,000 different baijiu distilleries in operation. Each of these establishments experimented with the traditional taste and aroma of baijiu, placing their own unique stamp on the production process. It was around this time that aged baijiu became a status symbol, with bottles that could be dated back decades exchanging hands for huge sums of money.

Things are a little different now. Xi Jinping took control of China in 2012, holding the title of President, and withdrew government funding of the baijiu industry. State support had previously propped up a number of distilleries, not least because substantial orders would be placed for official banquets and occasions.

This change in policy led to a rethink throughout the industry. Producers of popular brands of baijiu have now reduced their prices, meaning that working men and women can enjoy brands that were previously the sole reserve of the elite.

Whilst production of baijiu has slowed a little, it remains a hugely lucrative business in China. Over 17 billion litres of the drink are produced each year, which doubles that of vodka. This means that baijiu accounts for two-thirds of the world’s sales of spirits. Not bad going for a beverage that many have never even heard of!

Part of the explanation for this is enforced creativity being foisted upon manufacturers of Baiju by the government’s change in policy. The reason the baijiu is now targeting overseas markets is one of necessity, and many foreign importers and now looking to invest in baijiu. Major names including Luis Vitton, Diageo and Moet Hennessy have dipped their toes in the baijiu pool, and many more are certain to follow.

Baijiu will be making its way into your life – there is simply no way of avoiding this. Whilst the taste may require some acclimatisation, there is more to baijiu than simply a shot of alcohol. By drinking this beverage, your celebrating an entire nation’s heritage and culture.

In a world that is seemingly growing smaller by the day, this breaking down of borders can only be a good thing. Prepare yourself for your first sample, and remember the golden rule – baijiu must be drunk in one motion, with a cry of, “gan bei!” (See: How To Drink Baijiu)