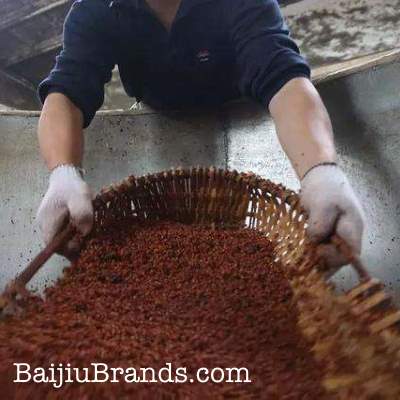 The production of alcohol is a serious and respected profession in China. Perhaps this is why the nation has a popular proverb surrounding the work. “Water is an alcohol’s lifeblood, qu is an alcohol’s backbone, and grains are an alcohol’s flesh,” claims the adage.

You’ll notice that this holy trinity of ingredients is entirely natural, and all are pivotal to the production of baijiu.

The difference between each and every bottle depends on how these ingredients are combined, and in what quantities.

To further investigate the use of water, qu and grain in the creation of baijiu, lets take a look at each ingredient in turn.

It’s almost funny. Baijiu is famously potent, alcoholic and fiery, making it almost the opposite of water. Despite this, common H2O is involved in every element of the baijiu production process.

Whether it’s washing the other ingredients, providing moisture to kick-start the fermentation process, and even diluting the finished spirit to make it easier to drink. That’s right, pure baijiu is even more ferocious than the tempered version sold in convenience stores throughout China!

Not just any water will do, though. Much like anywhere in the world, different provinces of China have varying water softness and purity. Soft water is considered to be ideal as it binds ingredients better while also inspiring yeast to work its magic.

Harder water still has its uses, providing magnesium and calcium to the baijiu. This is the kind of water found in southwest China, which remains the biggest production area of China.

Very hard water, however, can turn solid during the process which breaks and corrodes machinery, For this reason, hard water will be purified before any attempted use on the production of baijiu.

Another popular adage in China is that, “famous alcohol needs outstanding springs.” This leads into the belief that the unique quality of a province’s water plays heavily in the quality of their baijiu.

This means that relocating a distillery will only ever be considered as a last resort. Many producers believe that changing a water supply makes an irreparable difference to the taste of their product. The Chishui River is the most celebrated waster source in all of the country, playing into many distilleries.

It’s impossible to create baijiu without qu, or jiuqu. This ingredient is found in every baijiu or wine in China, and acts as a form of yeast. Qu, however, has much more to offer than simple brewing.

Qu is constructed by breaking grains that have been moistened until they can be moulded into paste. This turns the qu into lumps, which are stored in a cool, dry environment. Once here, the qu will cultivate friendly bacteria and yeast and convert any starches into sugar ahead of fermentation.

There are two primary forms of qu used in the production of baijiu, colloquially dubbed big qu and small qu. Big qu takes the shape of substantial bricks, usually constructed from barley, wheat and peas. Small qu, meanwhile, is made up of small balls of rice. It is quite common for medicinal herbs to also be added to small qu. This may be for health reasons, or simply to add a different taste sensation to the eventual baijiu.

Whilst qu is firmly in the realms of traditional Chinese ingredients, modernisation of the baijiu production industry is underway, This means that qu is now sometimes created under laboratory conditions, with the fermentation studied in microscopic detail. Overall, however, most producers of baijiu jealously guard the secrets of their qu recipes. Some traditions simply will not go quietly into the night.

Grains are arguably the most important and unique element of any baijiu. Which grains are selected for the production process will determine how the finished product tastes.

Some of the most popular grains used in the production of baijiu include:

Sorghum: This is arguably the most indispensable ingredient in any bottle of baijiu, but sorghum is a comparatively new addition to the spirit’s production. A tough crop that originally hails from Africa that grows in stalks of great height, sorghum easily melts to paste when it is steamed. The taste of the grain also changes once it has distilled, switching from bitter to nutty and aromatic. Sorghum arrived in southwest China around 5,000 years ago, and today some 90% of the native growth is used to create baijiu.

Long Grain Rice: The use of long grain rice ensures that the final spirit enjoys a fresh and light flavour, which some enthusiasts compare to Saké. Although long grain rice is starchier than sorghum and contains less fibre, it’s a healthier choice thanks to considerably lower levels of fat. The lower levels of protein also make for a lighter, more aromatic drink.

Glutinous Rice: This rice is stickier than its long grain counterpart, especially when steamed. This creates a sweet spirit. Glutinous rice is a fiddly ingredient to use in baijiu however, as it tends to become clumpy when heat is added. To this end, any baijiu producer than makes use of glutinous rice typically also needs to add a handful of other grains as ingredients.

Wheat: The primary purpose of wheat in baijiu is for the production of big qu, the building block of many baijiu recipes. Taken on its own merits, however, wheat also creates a pleasing and sweet taste sensation that’s not dissimilar to honey. This tempers some of the strength and potency of baijiu.

Grain Husks: Many producers of baijiu have no tolerance for wasting raw materials. Even though the husks of various grains need to be removed before their contents can be utilised, they are often applied to the production process to use as filler, and even to prevent leakages from the pots and jars that baijiu is stored within. This prevents some of the ingredients from clumping up, but husks can have something of a bitter taste. This is softened by steaming, but most baijiu brand manufacturers are aware that they need to use grain husks sparingly.

Whenever you drink baijiu and find that no two brands taste the same, it’s because they will have been produced in different ways – with different ingredients and water quality.

Discovering which form of baijiu tickles your own taste buds is all part of the fun. It’s only a matter of time before the rest of the western world catches onto this, and starts comparing notes on favoured baijiu brands. Learn what to expect, and you can dazzle your friends in the bars by explaining just why your choice of tipple differs from theirs.