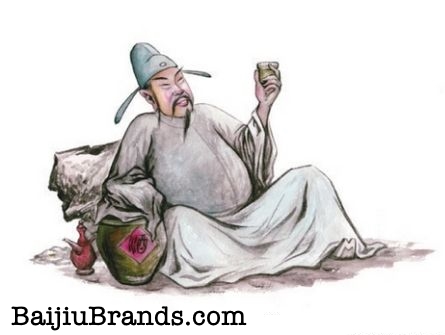 The history of Baijiu is interwoven with the history of China and Chinese culture. Alcohol goes back 9000 years in China and at first, the simple origins of making alcohol was considered something of a luxury to these earliest of pioneers. The religious and political rulers and elite class communed with the spirit world or used alcohol as a gift during religious rites but since then, it has played a large part in influencing so much of life in China – from politics, mythology, art and religion to social occasions and formal ones, the way that the journey has led to Baijiu and its importance over the last 600+ years cannot be underestimated. Now that Baijiu is branching out to the wider world, it is time the world understood that the story of Baijiu is the story of China.

In Jiahu, archaeologists found pottery shards dating back 9000 years; organic acid from grape wine was found with evidence of rice, honey and fruit used in a mix to make alcohol. This is possibly the oldest evidence of alcohol although barley beer production may also be the same age from the Middle East. This Neolithic grog was used by the ancient Chinese to reach the spirit realm. At the same time, the earliest playable musical instruments in the world are also discovered here, the flutes playing a role in their commune with the ancestors, just like the ancients of Egypt.

1st millennium BCE: Alcohol was regarded as a sacred liquid in ancient China; people still made offerings to the Gods or ancestors and indeed alcohol was regarded as one of the Nine Rites. Ancient emperors used court brewers to craft drinks and it was used to forge friendships and even to deal with enemies. Mythology plays a large role at this time too; the first legend speaks of Yi Di, a consort of Yu the Great, who ruled during the Xia Dynasty (2070 – 1600BC). Yi Di was asked to make or create a new type of liquor; the result impressed the king so much that he decreed everyone should enjoy it. Another legend talks of Du Kang. He lived during the Zhou Dynasty (1046 – 256BC) and while living in exile (in the forest), he hid some sorghum in a tree. When visiting to collect it several weeks later, Du Kang noticed a sweet smell coming from the tree. Legend says the sorghum mixed with rainwater, fermenting it into a spirit. To this day, Du Kang’s name is used to describe a great Baijiu.

Regardless of whether there is any truth in those legends, the Chinese do experiment at this time with various drinks such as beer too until they turn slowly to a grain, alcohol fermented from naturally harvested yeast. They called it Jiu.

1st millennium CE: China is a united land and Huangiu is no longer the province of Gods and ancestors; it is something that is enjoyed throughout the vast, new empire. Huangiu popularity spreads further and under the Han, Tang and Song Dynasties, Huangjiu influences poets and painters throughout the land. It is during the Tang Dynasty (618 – 907 AD), the poet Li Bai mentions a drink called Shaojiu – a clear liquid instead of yellow like Huangiu – in text. After that, a Song Dynasty written piece from 982 AD mentions a distillation method using wheat, barley and in short resembles the modern method of making Baijiu. Confucianists preach moderation and Daoists preach enlightenment through drunkenness. Li Bai, a Daoist, preaches to the moon and shadows. And of course Huangiu and Shaojiu.

13th century: As the Mongol Horde of Genghis Khan leave the Mongolian Steppes and invade China, they spread out further across Central Asia and eventually reach the Middle East, where Persian distillers are also practicing alcohol distillation. Around the same time, the centuries old trading along the Silk Road route also allows ideas to flow back and forth. Whatever the true source, distilled spirits appear throughout China and indeed may have arrived even earlier than the Yuan Dynasty (1271 – 1368AD).

The Ming Dynasty (1368-1644): Although the story begins with Huangiu, the drink Shaojiu becomes more popular with the peasant class initially by extracting the essence of Huangiu (yellow) and turning it into Shaojiu (white or clear). The earliest spirits are also similar to the Middle Eastern drink Arak, a legacy of the Mongol Horde and perhaps the Silk Road trading route. Producers of this spirit refine Shaojiu ‘burnt wine’ and the resulting liquor is known – finally – as Baijiu. Although farmers and peasants are the main audience, it slowly spreads to all corners of Chinese society.

1644-1948: As Baijiu travels further throughout China it begins to take on the different characteristics that define the varying aromas, in particular sauce, strong, light and rice. Almost every city and village that makes Baijiu begins to shape its own characteristics so in time the variation becomes more and more adept at developing the many personalities that Baijiu inhabits to this day. Initially the aristocrats still prefer drinking Huangiu, Baijiu being more popular with the working class. But over time, Baijiu ascends in popularity although the entire process takes centuries.

Drink of the People

1915: China goes out to the world, attending the Panama-Pacific International Exposition in San Francisco.

1949: The People’s Republic of China is born. Baijiu is adopted by the ruling Communist elite as the drink of choice and its popularity surges even further throughout the country. The state modernizes Chinese spirits, setting up regional distilleries throughout the country. Techniques that had once passed solemnly from master to apprentice brewer are for the first time recorded and codified. The different aromas of Baijiu become much clearer (sauce, strong, light and rice); standards of production and quality rise and national Baijiu brands become very popular, particularly Moutai.

1972: A visit from Richard Nixon results in him enjoying a glass of Baijiu alongside Zhou Enlai, Chairman Mao’s right hand man. The drink is now even more visible to a global audience although way before the advent of the internet.

Today: Baijiu is respected and enjoyed with every State dinner, every function throughout Chinese society, at every occasion from birthdays to weddings but particularly at business dinners – and gifted as a present. A deeply rooted tradition now spreads out not just to China but beyond. For the first time those Chinese from the south export Baijiu to their countrymen and women in the north, meaning Baijiu can be enjoyed everywhere in the empire. Distilleries begin exporting overseas and the global increase of knowledge and interest in Baijiu helps us appreciate why it is the world’s most popular drink, both in volume and market share. Will Baijiu finally be visible in the West as the biggest drink in the world and be recognised as widely as whisky or vodka? Will it start to become more prominent as a cocktail ingredient? Baijiu is not writing a final chapter; it is writing the beginning of a globally dominant one. (See: Baijiu Drinking Culture)